Wondering What It’s All About?

An Interview with Sally Ashton (by Nin Andrews)

NA: Congratulations on your new book, The Behavior of Clocks! I thought I’d start this interview by simply asking you to post the poem, “Time, Travels.”

Time and space are modes by which we think, and not conditions in which we live
—Albert Einstein

As the train pulls away, Albert waves at her window, watches until the last car disappears down the track, his time with the woman like a chapter in a book he’s been writing. When he lifts the pencil, the ideas don’t stop, just as the woman, in her own world, rolls on into her future. Looking back down the track, he sees the past is much the same, a story to wander in memory or bring to life again by writing down. In that way, the past is ever-present. He takes the stairs out of the station into the familiar streets, enjoying the walk, the early evening air, looking forward to getting back to his desk.

Through the dirty glass he is such a small man on the platform, waving, growing smaller, then gone. As the train gathers speed, she is alone at last with her thoughts. A remarkable person. An unforgettable trip. Once she’s home, she’ll write down every word.

SA: Thank you, and thanks for your interest. “Time, Travels” is the third in a brief series of speculative pieces about hanging out with Einstein that form an organizational strategy for the book’s adventure with relativity. 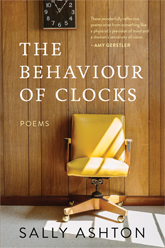 NA: Tell me how the idea for this book came to you.

SA: In the book’s preface, I explain how in the process of working on this collection, I became interested in Einstein and was given a book he wrote by a physicist friend. In the book, Einstein tries to simplify his theory of general relativity, and there I began to see connections to my own interests in time, space, and memory. It was Einstein’s famous “thought experiments,” a series of metaphors involving the movement of trains and clocks, that captivated me and helped shape this book in a way I hope reflects an experience of spacetime.

NA: One of my favorite poems in the book is “Waves, Cinque Terra,” and I was wondering how that fit into the theme of the book.

Say yes, then no, then no again
—Pablo Neruda

On the shore in Cinque Terra down the cliff from the trail between Manarola and Corniglia, even though we have a train to catch and lodging to secure, we sit down on midnight colored rocks where the Mediterranean rolls in tumbling them, a rhythmic rush and clatter, rush-clatter. I begin to stack the stones as high as I can, large to small. My son and his friend strip to their underwear, dive, swim, the late afternoon sun on water-splash makes an apparition like silver—they call, beckon me come in! Their bodies, their voices too a kind of silver.

How I wanted. How I always will.

SA: It’s so great to hear which poems connect with people, so thanks for that. As you know, the collection is exploring the theory of general relativity, and embedded in the concept of spacetime is the intimation of time travel. The experience of a moment that we want never to end, or one that remains crystalline in memory, or in a photograph, or even recreated in a poem, resonates throughout the collection I think. In this poem, the speaker views a particular instant as almost outside of time. While she allows herself to experience the “rush-clatter” presence, perhaps unconsciously she simultaneously stacks stones building a shrine to memorialize it. However in doing so, she fails to fully immerse herself in the larger experience the way the children do. The speaker realizes this paradox, that in holding on to an experience is in some way to lose the experience itself. Neruda’s quote suggests this paradox as well. Can we stop time? “Yes . . . no . . . no,” though maybe yes, again? I’m giving you a retrospective explanation since I don’t compose analytically, but looking at it now, that’s how I’d explain the connection.

NA: And then there is your poem, “Revolutions.” And I love this poem, in part because I think it argues with the idea that the end of all our exploring will be to arrive where we started and know the place for the first time. But maybe I’m not reading it correctly?

After sundown, the new moon makes a watermark in the sky, and off to the south a comet leaves a thumbprint of its journey past the planet back to its further orbit in space, time’s ancient minutes frozen in a trail of dust and ice. The moon sets, the comet fades, and all is as before. Which is a lie.

SA: Well, I like your explanation because it demonstrates the circular possibilities of time, where the past, present, and future merge and can be seen to inhabit those frames nearly simultaneously, relative, of course, to your point of view.

NA: And finally, there is the beautiful poem, “I have no proof that Lisbon exists” that I’d love to close with, and hear you talk about.

I have no proof that Lisbon exists

only waking dreams, like the cry of a gull
echoing in an alley or the lingering smoke
from a cigarette. Or, an imaginary war
that never occurs in your homeland though
everybody bleeds. The idea of Lisbon
is like that, like listening to someone who says
No, then Yes, each moment changing direction,
swallows darting mid-sky. And it’s summer always
in such a place that can’t exist. You walk
on pavement stones slick with heat, the streets
a school of fish flashing through the city
in every direction. They rise under your feet.
This is the dream part, when the trolley turns the corner
shaking like loose change and the river
opens before you, behind you the hills—a fine
specter, glazed with unerring light.

Saudade, someone might say. Saudade is not
to be alone as I am alone, but to be apart.
Absence is proof of nothing, neither is its phantom pain.
It is a memory stolen from another language
you find you are unable to speak.

SA: I love working with a quote as a title vs. an epigraph, almost creating a collaborative dialog within the poem. There is so much to say here that I find the poem’s last line truer than ever. To have found Pessoa’s statement while reading his Book of Disquiet during a stay in Lisbon where I was surrounded by the vivid, strange, and wonderful specific details listed here was profound. And uncanny. Pessoa speaking from the past into an unimagined now in the much-the-same city streets that I would soon leave to my own past was not only “disquieting,” but evocative of the weirdness of time and therefore our human experience. If we pay attention to it. We live our lives in a dimension we cannot comprehend. And then again, that Neruda reference slips in, an unsettling but satisfying ambiguity.

Thanks for giving me a chance to talk about the work! 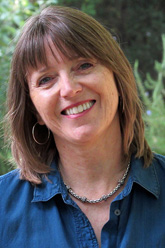 Sally Ashton is editor-in-chief of DMQ Review, an online journal featuring poetry and art. She has taught creative writing at San Jose State University and through UC Santa Cruz Extension, and has led more than 100 workshops including with Disquiet: International Literary Program in Lisbon, Portugal.

Writing across genres, in collaboration with artists, and specializing in short prose forms, she is the author of four books including the just-released The Behavior of Clocks. Her work also appears in An Introduction to the Prose Poem, in Breathe: 101 Contemporary Odes, in the best-seller Poems for the 99 Percent, and is forthcoming in A Cast-iron Aeoroplane that Actually Flies: Commentaries from 80 American Poets on their Prose Poems.

The featured poems are from The Behavior of Clocks by Sally Ashton (sallyashton.com), published by WordFarm. Copyright 2019 by Sally Ashton. Used with permission from WordFarm